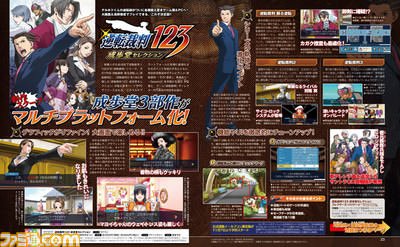 Previews for this week's Famitsu magazine are out, and reveal that the recently announced Ace Attorney Trilogy HD port for PS4, Switch, Xbox One and Steam will be featured in the upcoming issue. We'll have high definition scans of Famitsu when it's out. Furthermore, the English Ace Attorney twitter account has announced that it too will be sharing new details about the upcoming ports, likely the same as what will be shared in Famitsu.

For those in Japan, the release date of the port has been announced as February 21st and e-Capcom has also put up its limited edition versions of the game for Switch and PS4. Depending on which version you buy, it comes with a copy of the game, a soundtrack CD, a drama CD, a mini canvas art piece, a buildable Blue Badger kit and even some Steel Samurai trading cards. You can order them here!