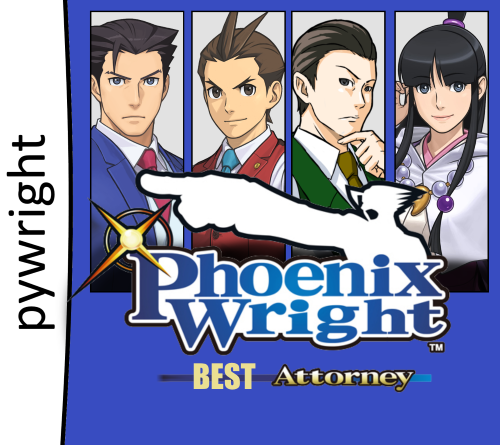 your gonna need to have pywright already cause this doesnt have it you can get the version its made for from the kajjid files by acejakkidfan, conflict of internet by ropfa probably has it too

plot: the award show has come to town and they are prepared to give awards made of rare gold to the best lawyer in los angeles. after debate they narrowed the candidates for the award down to two lawyers: spiky blue suit man phoenix wright and loud red boy apollo justice. phoenix must prove himself to be the best lawyer in the country because if he doesn't win his life may be thrown into assolute chaos!

case 1 (apollo) turnabout ceremony - when the award ceremony comes to town the man who hands the winners the award (harris prize) is accused of killing his friend so apollo defends him with phoenixs assistance against the idiot winston payne and his evil notstep brother gaspen payne. can the 2vs2 battle end with the truth bein found? or is the witness iamakille r telling... the TRUTH???? case 2 (phoenix) turnabout at the end of the rainbow - after the win in case 1 phoenix and apollo were decided to be good enough lawyers to win maybe. the next day it rained so hard a rainbow appeared, that's when phoenix gets a call from shelly de killer saying hell blow the fuck up his house if he doesnt pay him 1000000 buks. so phoenix and maya pack up their shit cause they were goin on a long adventure to the end of the rainbowwwww!!! an then they go out into the field and find it after like an hour. but before the leprechaun (lucky ladd) can give them his pot of gold his head is shot dead! the pot is taken as evidence so phoenix must figure out who killed ladd and defend niece shot against yuh'ar ah'winneh who's a prosecutor btw to get his gold case 3 (apollo) turnabounty - klavier gavins head has been demanded by the police for a grand reward of 500000, apollo and trucy must figure out who made the demand and prove klavier is innocent of whatever he did to get that bounty by defending him in the underworld criminal courtroom before it's too late!!!

case 4 (apollo) turnabout on the moon - because of the earth wanting everyone dead some day scientists start sneaking into people's homes and take them to the moon. two of their victims are apollo and trucy. however justice is not limited to earth, when an alien is about to be destroyed for killing another moon life form how could apollo not stand in moon court (against prosecutor ah'winneh who also got dragged to the moon) to prove the ugly shits innocents?

case 5 (phoenix) striking the turnabout - it's the final day of the awards and it looks like apollos gonna win but phoenix cant let him win. fortunately, the prime minister of the UK bill hawks is found dead. also phoenix gets call from de killer saying he did it and if he didnt want the agency and trucy and edged and gumshoe and maya and anyone else to die he must use this as a chance to beat apollo. phoenix defends some guy de killer framed but apollo sees through his plan thanks to his perceive bracelet so he becomes the prosecutor! with professor layton at his side can phoenix solve the puzzles, save everyone and defeet apollo injustice???