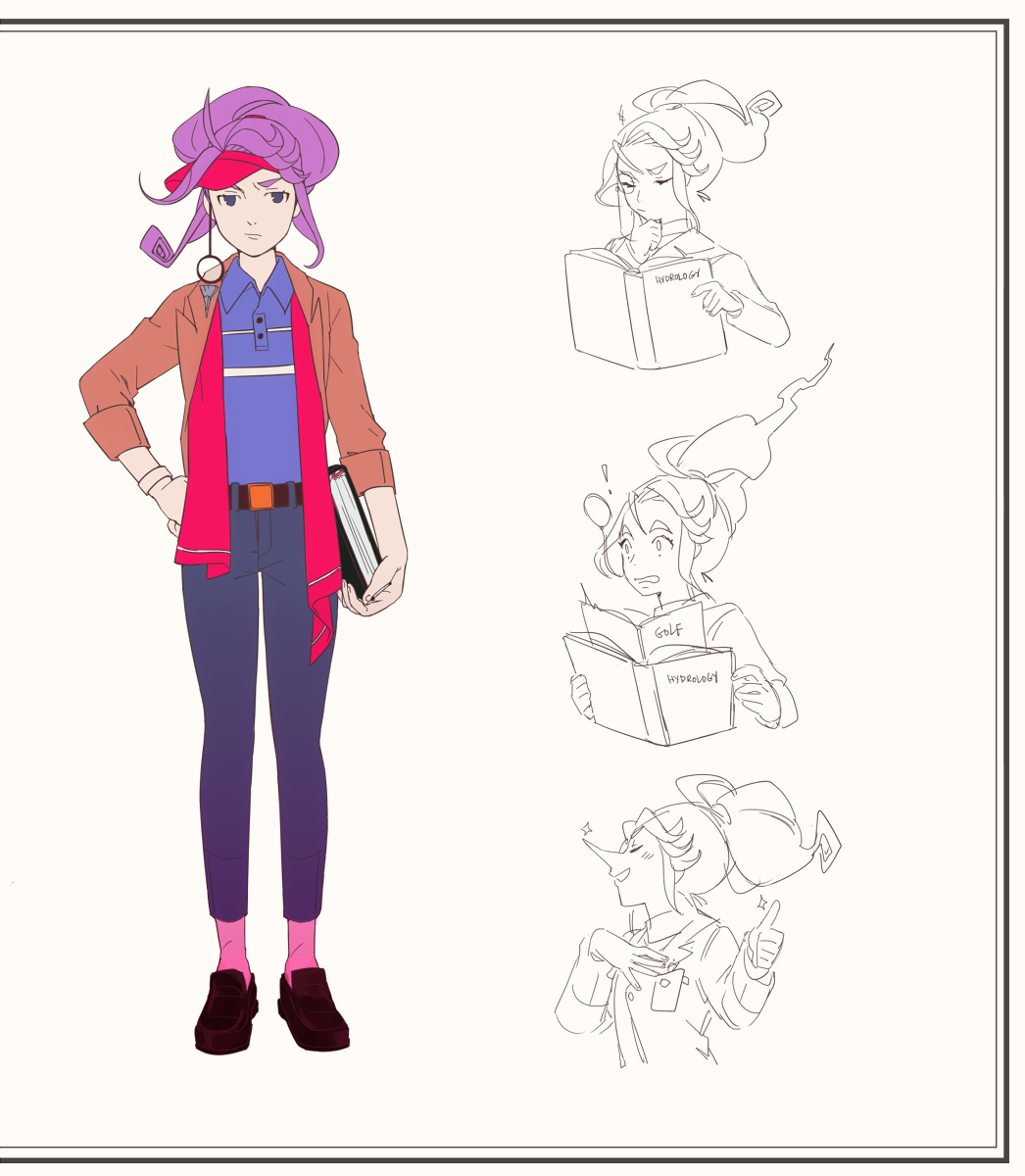 Brief Physical Description: Purple hair tied into a swirly ponytail, average height, slim body. She wears a magenta scarf with a brown coat,
dark blue pants, pink socks and loafers. Inside her coat, she wears a polo shirt tucked into her pants. On her coat she wears a lab ID (?), and two badges she proclaims are proof of her scientific achievements.

Brief Personality Description: Loves attention and loves talking. She just really wants you to know how smart and amazing she is! Acknowledge her genius already! Rather obnoxious. Doesn't seem to have many friends.

Connection to canon characters: She isn't related to any canon characters, but knows of Edgeworth, Franziska, and Athena from newspaper articles on their cases. She took note of them for being touted as prodigies that became lawyers at a young age.

Brief Background: She is introduced as a witness on the second case. While investigating the scene she will loudly proclaim how you should ask her questions because she has very important information regarding the murder! However, she just wanted you to beg her and promptly leaves afterwards, saying that she was told to not divulge any information by the prosecutor. What an annoying character!! She is a pain to cross-examine at the witness stand because she keeps derailing into irrelevant information about how she is totally a hydrologist.

Bayer is actually a professional golfer but has the annoying character trait of loving to LARP (live-action-role-play) in very inappropriate situations... such as the witness stand at a murder case. An eccentric character that is gullible and easy to please, she is very susceptible to compliments and praise. She was adored by her parents for her talent in golf since a young age, and was constantly called a genius by her peers, but once she became a professional after a while, it was deemed as normal and the praise stopped since her success was expected. She then started LARPing different types of "geniuses" for attention, but also because she kept wishing she was maybe another type of genius. Maybe then her parents would still think she was amazing.

Because she was roleplaying a different person, her account of events was inaccurate, but once her actual account is revealed, it puts her right by the scene of the crime, the golf course where she had been practicing. She's a red herring witness, and not the actual murderer, but blame is shifted on her and you end up having to defend her in court.

Extras:
As a golfer, her real personality shows, and she is serious and talks in a very dry tone.

Her name is a pun on "Secret Golfer," Seacrest sounds like Secret, and gulf is a type of bay. So Bayer would be Gulfer, which sounds like Golfer. Because of her being a "hydrologist," her name was water-themed (Sea and Bay).

The book she carries is a thick hydrology book, and when being cross-examined at the stand she is reading it, but she keeps a golf magazine inside which pops out when she is surprised/her contradictions are exposed.

Her monocle falls down and her ponytail droops down as her "true self," which resembles a golf ball (monocle) on top of a tee (badge on her coat), with her hair resembling the club.