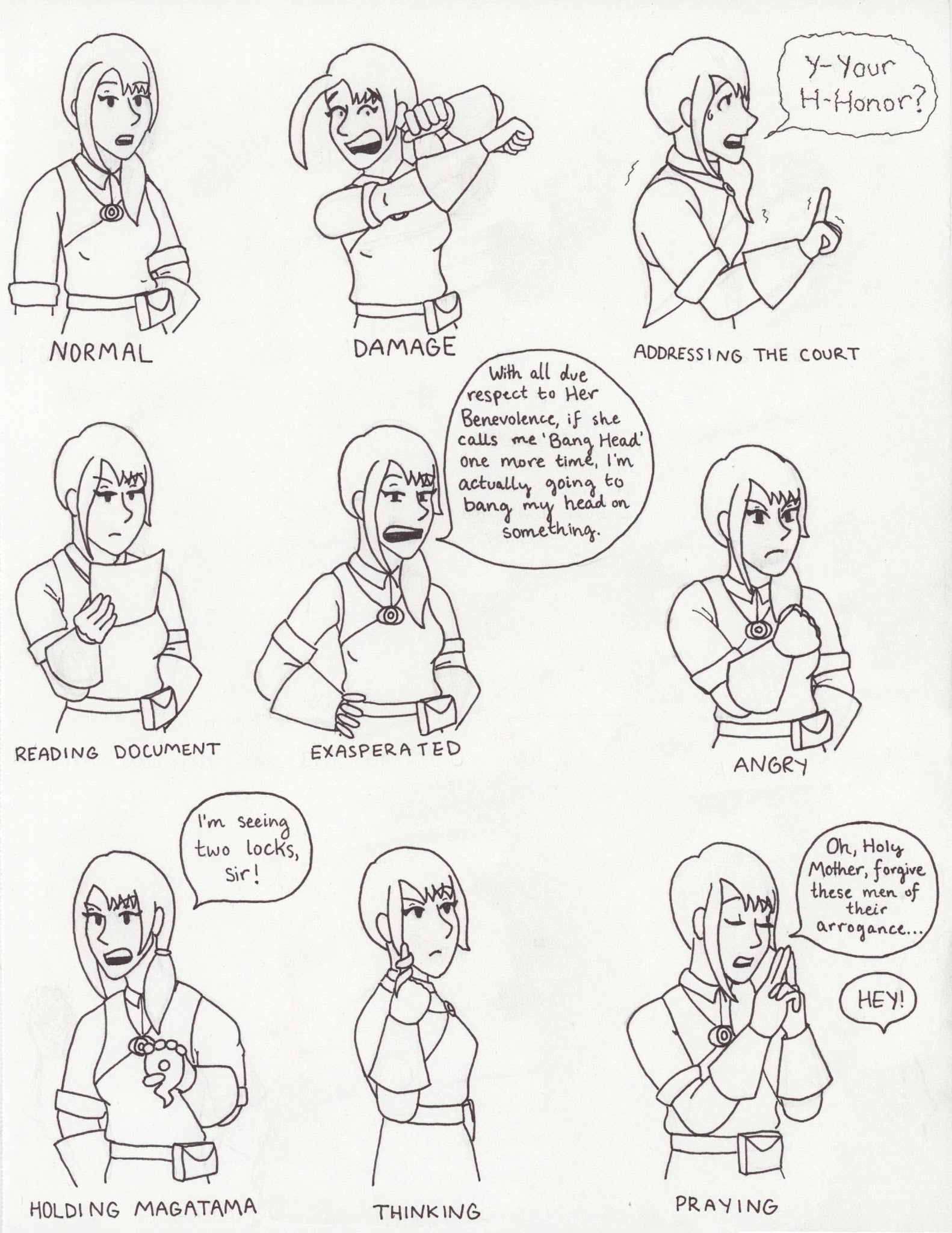 Brief Physical Description: Despite standing at only 5’0” and having a bit of a baby face, Sahtya is muscular enough to seem vaguely threatening. Her clothing is more practical than fashionable, meant to be suitable for both court and the martial arts she practices with Datz.

Brief Personality Description: Usually shy to the point of silence, Sahtya prefers to keep her morbid jokes, brilliant deductions, and sarcastic comments to herself. This tends to pose a problem in court when she refuses to speak to anyone but Apollo, but she's a talented enough investigator that she could be a great lawyer if she conquered her fears. At least, that’s what Apollo hopes.

Connection to canon characters: Sahtya and her twin sister were born to a couple in the Defiant Dragons, so she was quite close to Dhurke. She now maintains a good relationship with the rest of the Defiant Dragons. Apollo hired her as his apprentice at Justice Law Offices after Datz introduced the two of them. Her fascination with forensics, sarcastic attitude, and near omnipresence at crime scenes helped her befriend Ema very quickly.

Brief Background: Sahtya’s parents were active members of the Defiant Dragons until her father was arrested for murder. Sahtya’s mother, an attorney, failed to defend him in court, and they both wound up being executed when Sahtya was 17. The Khura’inist principle that sins pass down from parent to child meant that Sahtya and her sister were shunned from society at best and physically attacked at worst for their father's crime. Sahtya’s sister fled the country to find a new life, but Sahtya stayed in Khura’in where Datz and Dhurke took care of her. She went to school to become a prosecutor after seeing Nahyuta overcome the pressures of being a murderer's son, but after meeting Apollo, she was enthusiastic to use her legal abilities to help fulfill Dhurke’s creed. However, as a devout Khura’inist, she usually lets Apollo and Ema handle the murder weapons, believing that she might unintentionally kill someone at any moment due to the sins of her parents.

Trivia:
-Sahtya carries Dhurke’s magatama in her pocket since Datz didn't need it, Apollo had a truth-telling power of his own, and Nahyuta already had one. She usually keeps it out of sight so nobody will know that an item blessed by a spirit medium fell into the hands of a murderer's child. Or Dhurke’s hands, for that matter.
-”Satya” is a Sanskrit name meaning “truth,” with an H added due to the overabundance of the letter in the Khura’inese dialect. “Pallav” is a Sanskrit name meaning “new leaf.”
-Datz called her SP until he realized the ESP pun potential. When asked what the E stood for, Datz simply laughed.