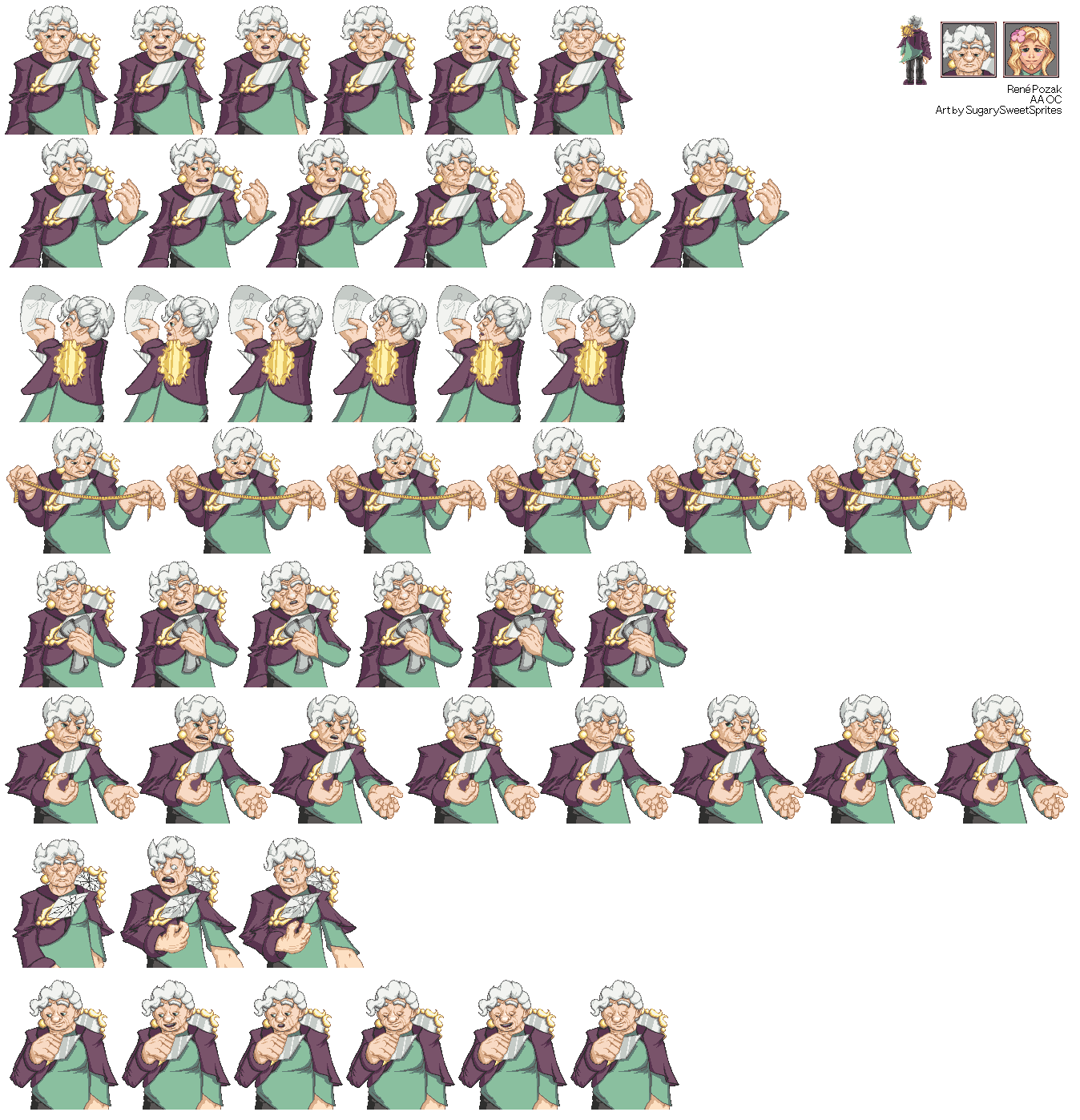 Brief Physical Description: An overweight older man with a slightly unfortunate face, René focuses less on his physical body than on his clothes. In his mind, a designer is no designer if they can't make any body, any face, any anything look good. As such, his clothes and hair are very flamboyant. His white hair is styled into a strange curved mess punctuated with a curved quiff.

Brief Personality Description: René is a world renowned designer. His clothes and other artistic projects are known worldwide, and he is incredibly passionate about his work... not that anyone could tell. In fact, Mister Pozak is notoriously inexpressive. Unless he seems particularly inspired, he's most likely to be wearing the same bland face, speaking in the same bland monotone, even in dire situations. Combined with an intimidating resting face, most people assume he's a typical grouchy old man. He does care very much about other people and the lives around him - he's just horrible at expressing it, is all. An awkward man who wants to build his art and build the lives of those around him. Connection to canon characters (if applicable): For a few months leading up to a fateful day, he hired Lotta Hart as a photographer. She would go on to be arrested for the murder of René's protege, turning René into the latest witness for the Wright Anything Agency.

When Pheonix heard that Lotta Hard had been arrested, he immediately came to her aid. The case seemed simple, as usual. Amateur designer Rex Gravenslash had been stabbed once in the chest and bled to death. At the time of the murder, René and cosmetician Kara Mess were busy preparing model Delilah Plasquet for a photo shoot, leaving Lotta as the only person with the opportunity to commit the crime. René expressed concerns for Lotta, but ultimately his testimony confirming their alibis and explaining Lotta's movements as he saw only seemed to finger Lotta further, as though he was setting her up.

It wasn't long before one piece of evidence turned the case around - an electric blanket René used to help with arthritis. According to Wright, Rex's body was draped in the blanket to make the body seem newly dead upon discovery, but the true crime was before anyone else arrived at the studio. This only left René as the true killer, and the case was set to close.

Just one problem; Lotta herself insisted that despite his arrest, René was innocent, and forced Wright to reexamine the case.

As it turns out, René hated himself for being romantically interested in his own protege, based on a large age difference and the intrinsic unhealthy power dynamic. Not wanting to hurt Rex, he had used his connections to find a different internship for the designer to distance them. René maintained his innocence, and the agency took his case. The new angle was René and Rex had fought over these feelings of his, and after a heat-of-the-moment killing, René moved to shift the time of death to frame Lotta.

The only remaining witness for the early morning was Kara Mass, who had arrived early for unspecified reasons. Contradictions in the her testimony and the case against Mister Pozak revealed that Kara wasn't there to just do cosmetics, she was there as a thief, stealing valuable fabrics, bits of jewelry, anything she could sell to help raise money for her son's bail. Now hiding nothing, she told them what she saw as she was sneaking through the building. She reported a crate containing several studio lights that René already reported having moved to the crime scene beforehand.

In all, the cover-up was built to keep the other three under suspicion and detract form the true criminal; Delilah Plasquet, who had killed the victim the previous day over trying to steal this internship from him. Knowing she had no alibi that day, she hid the corpse in this crate overnight, using the heat from the studio lamps to keep the body warm overnight. Rather than preserving the body though, keeping it at body temperature sped up the decay of the body, leading to further delays the coroner could use to accurately assess the time of death. With that update, the rest of her plan unfurled in front of them. It was only with the real killer being found and himself and Lotta being found innocent that he smiled for the first time in front of Wright.

Name Meanings:
-René comes from famous contemporary artist René Magritte. Pozak is a play on both "pose," as he is a fashion designer, and "Pollock," famous pop artist.
-The case victim, Rex Gravenslash, is meant to have a deceptively evil sounding name for who is essentially a sweet and gentle person.
-Delilah derives from "the liar," plasquet from "plastic."
-Kara Mass's name is a play on the cosmetic product mascara.

Further Notes: I wanted to draw him more in the style of the original Ace Attorney than the later games. While the art does get nicer, I always think of the colors of the original game as the truest Ace Attorney art style, and wanted to emulate that. His design wasn't meant to be like the cute assistant or cute prosecutor or cute whatever that are usually made, he was meant to be a one-case sort of suspect. Someone slightly dumpy, slightly ugly. Somewhat inspired by Kane Bullard or Ernest Amano. For everything I was aiming for, I was happy to come out with a design like this that captured all the ideas I had for him.